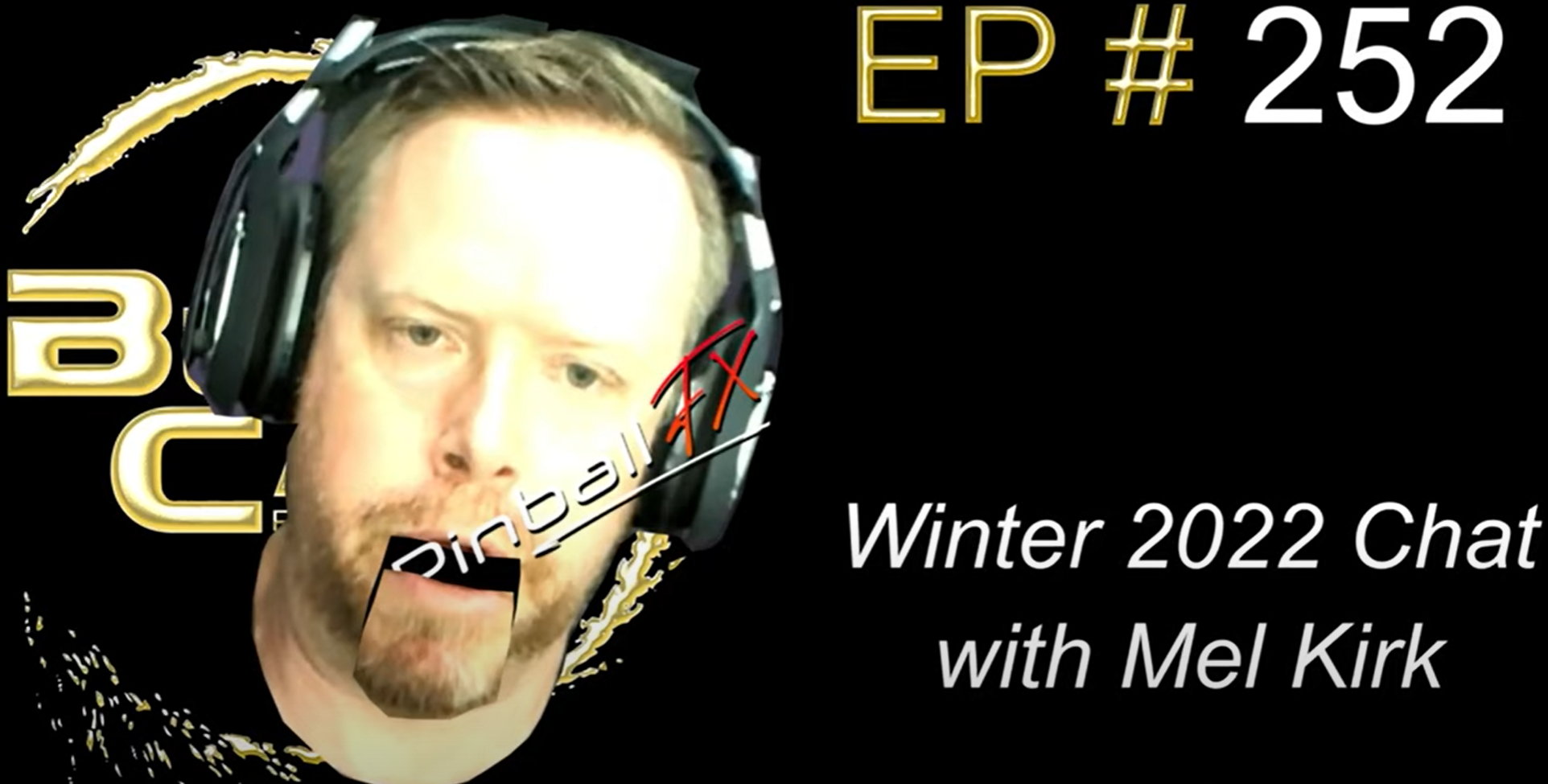 Get tons of info related to the upcoming console releases of Pinball FX, The Addams Family, and the decision behind removing ticket pricing.

And, of course, Mel’s responses to our questions go several levels of detail deeper than you’ll get elsewhere. Our interviews are not marketing-focused: we’re about the business side of digital pinball.

Join us on our Discord server to chat about the show.

We will get Pinball FX on PS5, PS4, and all the latest Xboxes.

That amounts to a total of 17 brand-new, never before seen tables on Zen Pinball console offerings.

April for Switch and "other platforms".

The game is very network heavy, and the Saber Interactive team doing the network stuff was in St Petersburg. So obviously, with all that is happening in that part of the world, delays were going to happen.

The target for a Zen Pinball table designer is to produce two games a year. So the target of 12 developers.

The studio is now about 120 people strong. At the point when they were acquired, they were 65 strong. So two years and the company has doubled.

Are RPGs going to be pinball games? Well, the answer is "maybe".

The idea is to let developers work on titles they are passionate about, which results in fantastic table designs.

The success of this third-party game was all about the timing with FIFA.

The reason why this game plays so much better than others.

98% of players play with enhancements most of the time. The stats don’t lie.

You’ll see more tasteful enhancements in Addams Family when it releases in February 2023 for $9.99

One of the expected exclusions is Christopher Lloyd, specifically certain high-detail assets on the backglass.

Mel touches on the challenges of low-fi likenesses in tables and how careful you must be when negotiating deals.

Several negotiations are ongoing with several parties for future Williams tables right now. The challenge is always music and licenses. But mostly, the music in the games is the most problematic.

Mel did not confirm if Gold Mode is in The Addams Family. However, he hinted we should hang out until January for more announcements.

Nothing official to confirm with Steam support, but "historically, we have supported Steam," so read into that as you will.

So what about mobile? Is Pinball FX really going to run well on Android or iOS? The fact remains that some mobile devices are more powerful than the tech in the Nintendo Switch.

For example, Mel has an Asus notebook with the latest Qualcomm chipset. It is running Pinball FX natively, so expect a decent experience on the latest phones and maybe even some of last year’s hardware generations.

The Nintendo Switch is a special console that requires special attention. But when tuning is finalized for Switch, you will see huge improvements to the minimum spec required. It is the lowest common denominator and is the primary performance target.

You will notice that the room environment in Pinball FX is heavily inspired by lessons learned in the Star Wars Pinball VR "pin-cave". Mel confirmed that VR will be a part of the core Pinball FX experience and not a separate app.

Unfortunately, the overwhelming feedback from customers and influencers was that they opposed the ticket system and called it "predatory". The advantages could have been communicated better when the system was released. This communication error likely made the system fail from the beginning.

This means different platforms will have sales running at different times, so keep your eyes open. This also flows into how releases need to change. Expect games to be packed into three packs and released every couple of months.

Games will be offered at a discount upon release for about a week when they are released. But the discounts are only available for a set time. They can’t be extended because the ticket system was the key to doing this.

What is going to happen with ticket balances? Look out for an official announcement from Zen very soon. Possibly by the time this episode is released.

Akos and Linne’s work on building the cabinet was not an accident. The studio wanted to build a cabinet from the ground up to experience the key things needed in a build.

Cabinet mode is so integral to the long-term strategy that a dedicated team is now managing the Cabinet Mode experience. That includes partners offering Zen Studios endorsed builds with optimized software that "just works".

Some seriously cool packages that aren’t just targeted at those pinball fans with deep pockets.

Where possible, there will be alignment with "moments" (read TV shows) in 2023. The goal is still to release 24 tables in 2023. That is the plan in Mel’s spreadsheet of doom.

In fact, the tables planned for release between February to April 2023 are already submitted and in the pipeline.

One table is returning to the platform that is not included in the 24 planned tables.

Mel talks about how the Pinball Show filled the gap of traditional press outlet coverage shrinking.

Mel is no longer involved in production and marketing (for the show) but just gets scheduled to talk about stuff.

The team is taking a more creative direction with the show now.

Three other really big Williams games are coming to the platform in 2023.

Shadow, Congo, and others are living up to their reputation as challenging to license. This shouldn’t be a surprise because even the pinball community understands how many parties must be involved in these pinball table licenses.

Several titles coming out next year have not been released commercially. I wonder what they could be?

Mel suggested we organize an interview with Deep and the Content team about how design works at the studio.

If you want to Say thanks for this episode, click the link to learn how you can help the show.

If you want to make your digital pinball cabinet look amazing, why not use our Cabinet backbox art for your build?