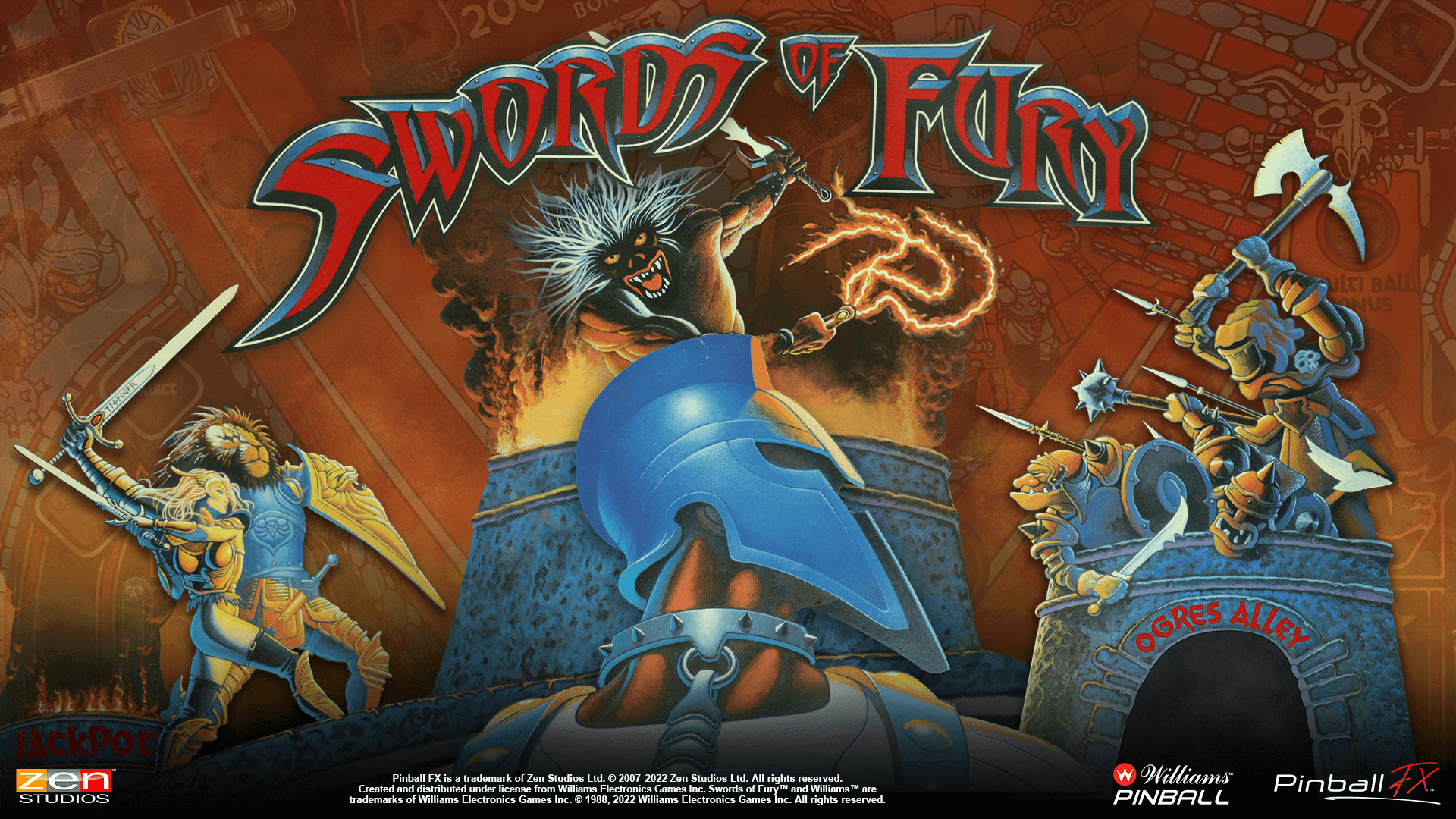 We also dive into the announcement about Zen Studios collaborating with Toho Studios for a trio of Monsterverse tables due to crash through buildings in late 2022.

Then, of course, cabinet mode is now available in Early Access. Is it worth trying out at the moment?

Zen pushes out a new table (to their specific platform) for the masses. The table is Swords of Fury, a System 11B table released in mid-1988.

The sound on this re-creation is very well implemented. This quality gives the community hope for audio fixes we’re currently waiting for in WPC systems like White Water. 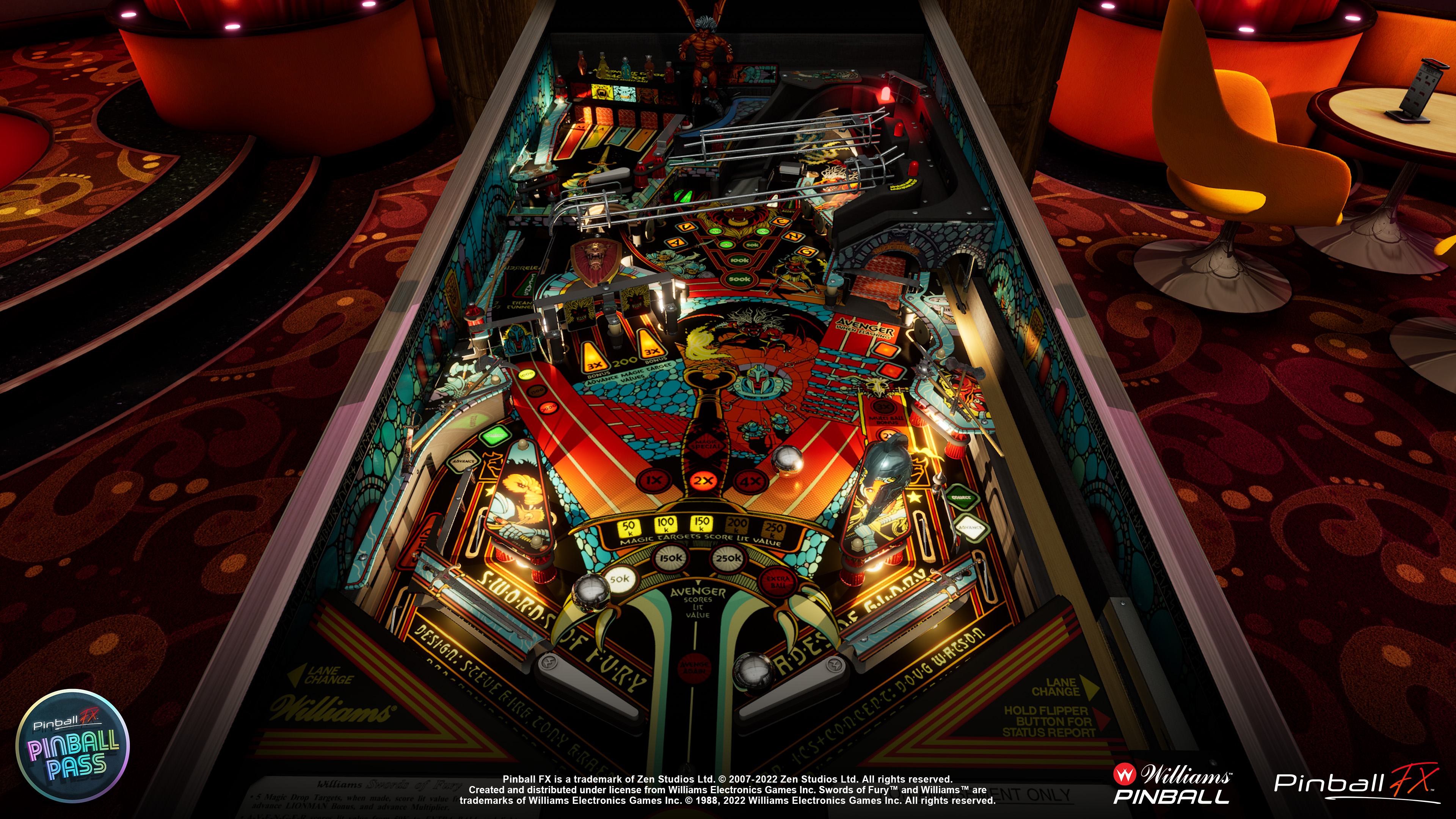 We talk through some of the finer points of this table and how it feels. For example, the flipper feel a bit overpowered compared to a real table.

Chris compares The Pinball Arcade version of Swords of Fury with Zen’s version and notes some differences that might’ve been difficulty-related settings that Farsight chose at the time.

This is the official name of cabinet support in Pinball FX.

The support in this first iteration is heavily config-driven. You need to manually edit a config file to get your screen positions set up correctly.

It’s a good time to remind everyone that this mode is a first-pass at cabinet mode. It only exists so that folks can actually get the game running on their cabinet setup.

What you see at this point in time is what you get for now. The studio is focusing on consoles exclusively.

Cabinet mode will also be an in-app ticket purchase, with the price set by you. You could spend one ticket. However, that sends a bad message about how much you value this feature.

The better way to manage cabinet mode is to offer a short trial to prospective customers and then ask them to pay what they think it is worth.

45:00 - Other Williams tables that were released with Swords of Fury

Road Show now lets you shoot reliable shots up the left ramp. You can make the left ramp with a rolling ball, which was impossible on FX3. You had to trap up and then shoot on FX3.

Tales of the Arabian Nights has an issue with the captive ball not registering. The fireball animation in the game now looks incredible and is probably the best visual enhancement to date.

White Water actually suffered a regression in the public build. The well-known hi-hat cymbal noise is still there, but they also screwed up the bass orchestration.

Cirqus Voltaire looks great with the neon tube really popping in-game. The table has received a lighting pass to make it darker, making the neon really stand out. Neon Multiball still doesn’t quite deliver because the ball is yet to receive a lighting pass, and the intensity of the ball does not change.

I pointed this out to Chris, and he suggested that it was the "Motion blur" setting in the game, but I did not have that turned on.

It turned out that pinballwiz45b suggested it was due to Temporal Anti-aliasing (TAA) settings. If you change TAA to Fast Approximate Anti-aliasing (FXAA), the blurriness disappears. If you do, you may find a performance impact, but it dramatically improves the motion blur.

The TAA setting doesn’t just affect Pinball FX. There are plenty of documented cases where other top-tier games suffer the same issue.

Zen is very close to completing its in-app purchasing backplane. You can now bundle your own packs, and there are some ways you can really maximize your discounts. Stack 'em up to get up to 46% off!

60:00 - Zen partners with Toho Studios for the Monsterverse tables

You get some Godzilla action in late 2022 (maybe early 2023). What will be interesting is to see what Zen can do with Godzilla now that Stern has released Godzilla. Zen has a real opportunity to dramatically make this table a digital effect extravaganza. Godzilla could destroy parts of the playfield, which could affect how the balls travel.

The turn of phrase that Akos dropped in the pinball show suggests a pretty clear clue about the next table. Can you get it?